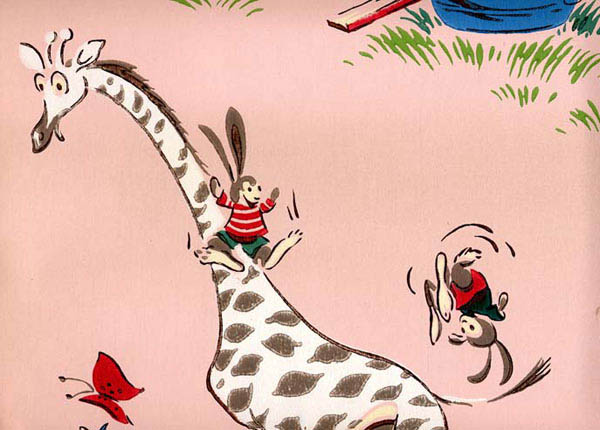 Do you ever look at novelty designs and wonder  where they came from?  In the design world, they are known as conversational prints. They started to come into play around  the early 1900’s but became extremely popular in the 1940s. When you look at some of the quirky patterns used on fabrics and wallpapers  you start to understand why they were called conversational prints as they certainly gave people lots to talk about. These designs create a  nostalgic link  which often makes us laugh and smile.  Most of the early  designs were made for children and featured nursery rhymes, baby animals, children at play, cartoon characters, alphabet letters and numbers.

History had a huge influence on the subject matter used in fabric designs.   During World War II, textile production was limited yet women and children often wore  patriotic prints  as it was a popular theme amongst the home and clothing markets. Even today in fashion, designers like Ralph Lauren love to use patriotic images to create the  look of American style.  Many emblems are found in  items as  wallpaper, bedding, glassware, accessories and more.

Around the 1930’s Disneys Mickey Mouse and many of his friends like Snow White and the Seven Dwarves were so successful, it spurred on the commercialism of these characters onto fabrics and various home goods. Comic strips had a big part of influencing novelty  designs. One popular comic was Archie as well as Popeye and Olive Oyl. We remember these now as classics but back then, it was  a fun brand  to market.  Many of these images were printed on feed sack as consumers loved the characters and what would be more fun than finding them on clothing or  home items. 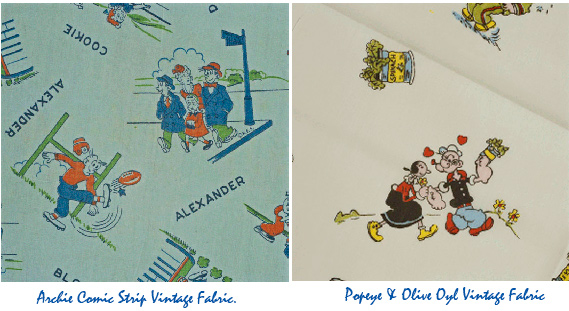 Even food got into the branding act and went from the kitchen onto  clothing.  Many products like the  Jolly Green Giant and  the Planters Peanut were popular icons.  Do you remember  the commercials on television with Tony the Tiger? They had the saying “Put a tiger in your tank.” Well, I remember having that faux Tiger tail hanging from our gas tank on our car. It certainly made life fun. 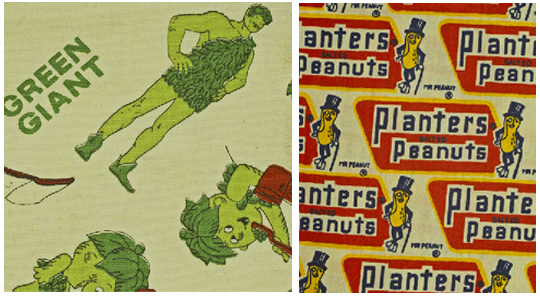 As soon as television was invented  it became the  hottest new visual medium and totally changed how we looked at everything. Important things were happening in America: Hawaii  became the 50th State in the United States of America and  space travel had started.  One of  President John Kennedy’s goals was to send a man to the moon.   There was Sputnick in 1957, John Glenn, Alan Sheppard and Neil Armstrong’s famous walk on the moon. Of course the quote of the day from Neil “ That’s one small step for man; one giant leap for mankind” all impacted design and  famous world events were instantly being translated onto fabrics documenting history.

During the 1950’s and 60’s  the wild west theme became  extremely popular and many images of cowboys and Indians were featured on television shows as well as in fabrics.  Do you remember Gun Smoke? Well, I remember my brothers having cowboy and Indian dress up outfits  as well as wild west pj’s.

That trend faded for a while and then  the wild west style came back into fashion  with the help of president Ronald Reagan, uniting Hollywood and politics, once again.  Hollywood certainly did its part in branding famous singers, dancers and actors.  Singers like Elvis Presley even joined in becoming a design phenomenon. 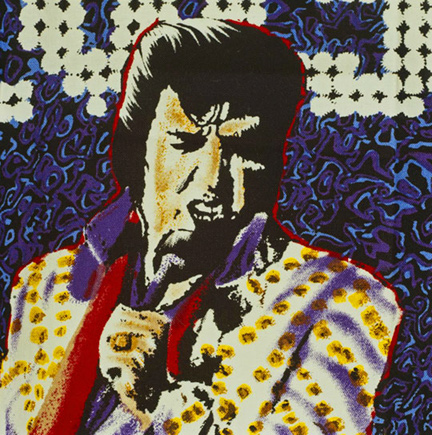 Other  major influences in design came about with Jackie Kennedy; the style goddess!  Yes, even after her trip to Paris, she influenced many vintage fabric designs to include French poodles, The Eiffle Tower and hats  to name a few. 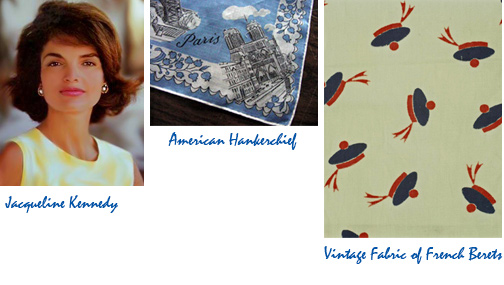 Today, many top designers like Calvin Klein and Ralph Lauren use vintage fabrics to inspire  their fashion and home patterns.   Fashion designers of scarves like Faith Austin of the 1950’s was known for her whimsical novelty hankerchieves; below is the hatbox print hankie that inspired the   5th Avenue design  for Jaima Brown Home.  A classic example of how vintage fabrics are incorporated into today’s lifestyle products. 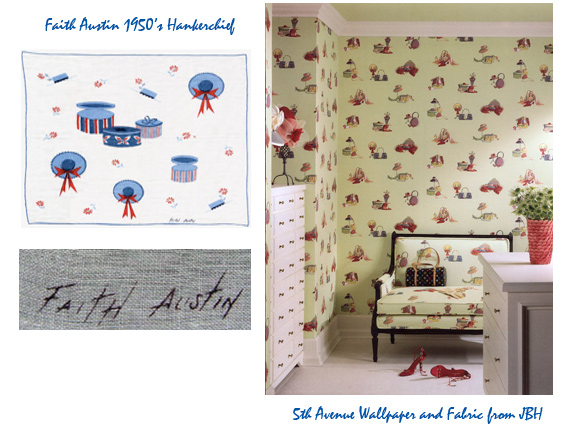 The themes  for  novelty prints from the past was extensive and still continues  today. Travel was and  still is popular in America. States  and destination places were often featured on vintage fabrics yet they still are found, updated mind you, in the home market usually found in accessories like bags, bedding, pillows, towels and evenpropecia cancer boxes” href=”http://www.uncommongoods.com/item/item.jsp?source=related_ug&itemId=15622″> mail boxes. 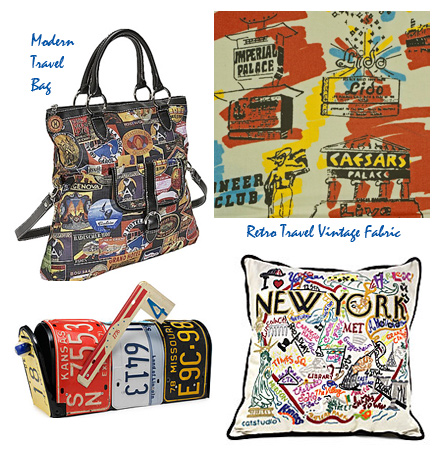 Other  vintage conversational prints included sports such as  baseball , golf , sailing and football. Today, we see novelty prints being used differently as they have moved into the luxury home and fashion marketplace.  These unique patterns are being intermixed and used  on pillows to make a small statement or in a wallpaper to make a grand effect in a room.  Trina Turk, Brunschwig & Fils, Thibaut, Jaima Brown, Ralph Lauren and Calvin Klein are just a few of todays designers that use vintage fabrics to be inspired for today. 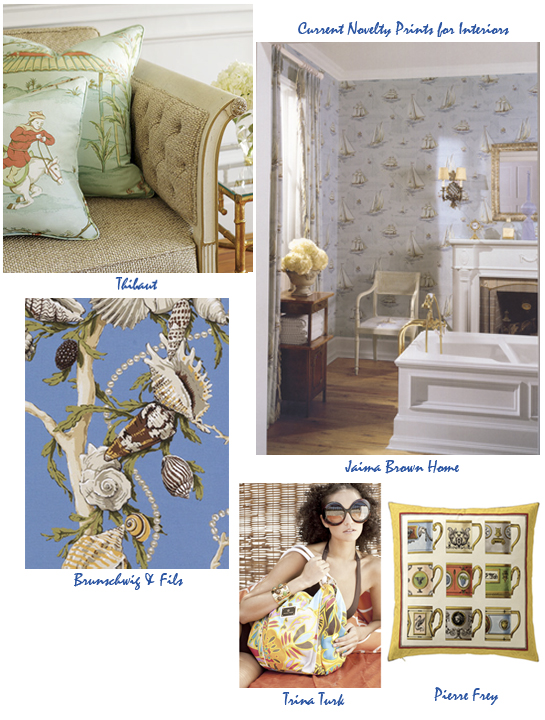 Get some conversations going with your patterns today, no telling what they will say about the past or future!